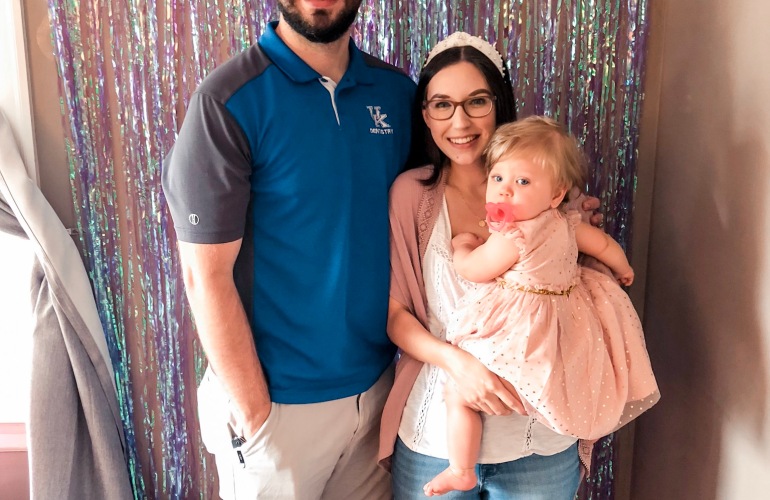 Let’s be honest, first birthday parties are for the parents. I chose a donut theme for Lyla’s party for two reasons. One: I used to work for a photographer who did a lot of one-year sessions. Moms would buy these cute smash cakes for their babies to tear in to, and the babies usually just stared at them. Additionally, Lyla gets uncomfortable when a lot of people are looking at her. I wanted to avoid a big buildup to the moment she would eat her cake, so I started thinking about alternatives. Two: Andrew loves donuts. I mean he is literally passionate about them. I knew if I chose a theme he was excited about, too, it would make planning the party a lot easier. Below, I’m sharing my inspiration for the party along with some photos from the day.

The first thing I choose when I’m decorating something is the color palette. Color is what makes the most sense to me in design and the first thing I notice. Lyla’s signature color is lavender, but most girl stuff is pink. I went with a purple, pink, and teal color palette to make choosing my decorations easier.

I found tons of cute, customizable options on Etsy. I chose these and asked for the design to be tweaked just slightly to match the party colors. I had them printed on cardstock at Office Depot and picked up A7 envelopes while I was there.

We ordered from a local donut shop called Munal’s Donuts. They customized an icing color for us at no extra charge! We did donut kebabs using these paper straws, also from Etsy. Andrew built the donut board and I have hopes to use it for future parties. Rumor has it the Krispy Kreme recipe originated at Munal’s Donuts. An employee there branched off and created Krispy Kreme. They have a non-compete contract clause that states Munal’s cannot lay claim to the Krispy Kreme recipe, but Krispy Kreme can never open a location in the Paducah area. Paducah is so cool!

Since the donuts were so sweet, we also served healthy and savory finger foods. We did a vegetable tray and Chik-Fil-A nuggets. I wish I always had a tray of nuggets in my house. For drinks we did milk, coffee, and bottled water. We went very simple with the food and I felt like we had plenty. I don’t think anyone shows up to a child’s birthday party expecting a huge meal.

The decorations ended up being a little challenging. I had everything picked out from Party City, but they kept canceling my order as soon as I placed it. I had to make do with what I could find at other stores, and most places aren’t stocking party supplies right now. I ordered this set of serving pieces from Amazon. Full disclosure: the color on the plates and napkins is a yellow-ish ivory, not white. I got a lavender plastic tablecloth at Target and a banner from Hobby Lobby to go over the food table. I put together a backdrop with the intention of using it for photos with the birthday girl, opening presents, and to sit her hi-chair in front of for her donut & singing “Happy Birthday.” I got a fringe curtain from Amazon, a tassel banner from Michael’s, and balloons from Target. I’m not linking the fringe because it fell down approximately one minute after being put up. It was adhesive but if you do something similar, I would tack it in with thumbtacks. The banner had to be strung and tied so I’m not linking it either because I found it super frustrating that it didn’t come assembled. And the balloons ended up being a hassle. We had to find somewhere to get them inflated, the place we went had obviously not trained anyone on how to use the helium, and the balloons ended up deflating by the time of the party. So my dreams of Pinterest perfection were dashed. But for a brief, shining moment we had a cute backdrop.

I also made two banners for the party, one to go on her hi-chair and one to display her monthly photos throughout the first year. I used thin purple ribbon from Michael’s. For the “ONE” banner, I used scrapbook paper, cardstock, and sticker letters from Hobby Lobby. I am cursed with being creative but not artistic, so I had Andrew cut out the pennants. For the photo banner, I got square prints of her photos and used mini wooden clothespins from Hobby Lobby to hang them. I loved it so much I hung it in her nursery after the party!

Since most of the guests at the party were going to be either adults or babies who can’t have anything that would present a choking hazard, I opted not to do favor bags. Instead, I ordered these thank you stickers from Etsy and put them on food-safe white bags from Michael’s so people could take home a donut. I knew we would have extra and the personalized stickers were such a cute touch.

We had so much fun at Lyla’s party! She did great and she had a blast getting all the attention. It was a bittersweet day for me as my family was unable to be there while my Dad fights leukemia, but we were blessed by the family and friends who were able to join us. My best friend since 5th grade, Victoria, even drove up from Mississippi during some of her rare days off from being an ER doctor to be there! It felt too good to be true!

I’m linking my Pinterest board for the party below for more inspiration! Hopefully this will give you some ideas for your next party!

View all posts by ashtonrosecude

They both wore pumpkin shirts to pick out our porch pumpkins and I almost got a photo where they were both looking. That’s a Bronze medal in the Mom Olympics. 🥉 🎃
8 months of Miller and the milestone blocks no longer stand a chance. This month was a big one:
Our princess is 3 👑
Cleansing the timeline with baby laughs. Lyla always gets the biggest laughs out of Miller just by being who she is. He is fascinated by her and she loves to make him happy.