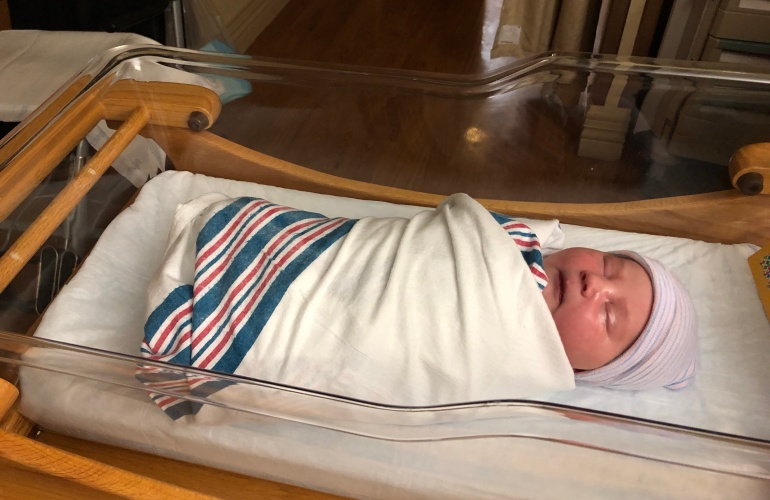 Our baby girl is finally here! Lyla Rose Cude joined us at 5:37 pm on Monday, September 9th, 2019. I’m sharing her birth story today because it was so special and I always enjoy reading birth stories from other mamas. I chose to have an epidural, and I’ll also share how that impacted my birth experience. Please know that I would never try and sway any woman toward any particular choice when it comes to birth. I just think the more information you have, the more informed your decision will be. I had a completely positive experience with my epidural and I feel like most of the things you hear about epidurals are negative. So…without further ado…the story of Lyla’s birth!

They say every labor is different. My labor progressed over a period of weeks. Lyla was head down and VERY low for most of my third trimester. This made the waiting extra hard because it felt like my body was teasing me. I was so uncomfortable. Every contraction I would think “Is this it?!” but it would inevitably subside. I wanted labor to be like a checklist, and I had completed every step except the baby coming! I reached the point every pregnant woman talks about…I wanted that baby out! We had discussed the possibility of induction on September 10th with my doctor, but for some reason an elective induction just didn’t feel right for me. As much as I wanted to meet our daughter, I wanted her to have every chance to come on her own. I ended up going into labor on my own at 39 weeks, 5 days pregnant.

Andrew and I spent all day that day just relaxing around the house. We were both trying not to be anxious, but we were so ready for her to come. I paced the house, did squats (yes I tried to squat my baby out), and tried my best to stay somewhat comfy. I was so sad when we were getting ready for bed because I had the whole weekend with Andrew and she didn’t come, and there it was time for him to go back to work the next morning. As we lay down to sleep, I began to pray. I prayed that God would help me to trust his timing. I prayed that if Lyla wasn’t ready, that she would stay in my belly. I prayed that he would help me have peace knowing that if she wasn’t coming, that meant she needed to stay in there for some reason. I prayed that if she was ready, that he would compel my body to respond to her so she could make her way into the world. I am not exaggerating when I tell you that as soon as I prayed that sentence, my water broke. And this was no maybe. Lyla has a flair for the dramatic and there was no denying that’s what had happened. I gasped and said, “I think my water just broke!” Andrew turned on the light and confirmed what I already knew…this baby was coming!

Andrew packed the last minute items in our hospital bag while I showered and tried to figure out what to wear while my water was actively breaking (Spoiler alert: there is no right answer). During the drive to the hospital I was nervous, excited, anxious, and everything in between. We checked into triage where they confirmed that my water had, in fact, broken and admitted me to labor and delivery. By that time I had been in labor for about two hours. My contractions were painful but nothing I couldn’t handle. I chose to labor for a little longer without medication while I felt like the pain was manageable. We watched The Golden Girls on the hospital TV to distract me. After three more hours of labor, I decided I was ready for the epidural. I wanted to get it before the pain got too intense just in case there were any complications and we needed to re-do it. Even as confident as I felt about my decision to get the epidural, I was absolutely terrified. My entire body was shaking. Andrew helped me calm down as much as I could. My anesthesiologist was patient and reassuring. Thankfully my epidural “took” on the first try. The only tiny hiccup was that it didn’t numb my contractions at first because it didn’t get up high enough. We consulted the anesthesiologist and all it took was for me to lay completely flat for about half an hour and we were in business!

I know every woman, every labor, and every baby is different. For me personally, the epidural was the right choice. I was completely lucid and fully present for the whole birth. I didn’t have any complications with the placement. I was able to feel everything I needed to feel to push. And most importantly, the relief provided by the epidural allowed me to focus on my baby instead of focusing on the pain. Had I opted for natural childbirth, I would have had to devote all my energy to dealing with the pain. I’m not sure I would have had enough remaining energy to push. I also have anxiety, and I was concerned that if I went natural, the pain would get to a point where I could no longer cope and I would enter a state of panic. If that were to happen, I knew there was no way I would calm back down because the pain would only intensify as labor progressed. For me, the epidural was the most empowering part of my birth experience, because it provided me the relief I needed to take on the task ahead without fear.

After I had labored another several hours, my dilation stalled at five centimeters. Since my water had already broken and time was of the essence, they gave me Pitocin to speed up dilation. At my next check I was up to seven centimeters. Lyla didn’t love the Pitocin, so they stopped it and allowed me to progress on my own from there. The next time they checked me it was time to start pushing. This is where things really got interesting.

What we didn’t know until it was time to push, was that Lyla was in a position called LOP. Her head was turned sideways with her chin tilted upward. They couldn’t just turn her because they couldn’t tell where the umbilical cord was. My whole labor, Lyla’s heart rate had dropped with every contraction. This led to concern that the cord may be around her neck. My doctors wanted to give me a chance to push, but they also had to act with an abundance of caution for Lyla’s safety. My doctor explained everything to me and said, “Babies in this position can be delivered vaginally. I’ve seen first time moms do it…It is very hard.” She let me know that if at any point they felt I was exhausted or Lyla was in danger, they would do a C-section before the situation turned into an emergency. I was so thankful for her honesty and I trusted the team of people in the room to make the right decision if a C-section became necessary. But there was just something in me that told me I could get my baby here by pushing. She had been so low for so long, I just felt sure that she knew what to do and that I had the strength to help her.

With each push, Lyla made progress. Then she promptly scooted back up and all progress was lost. That pattern went on for an hour, with her heart rate continuing to drop each time I had a contraction. They put me on oxygen to give her as much air as possible. At that point they brought in a high risk doctor. I also had a whole team of nurses ready to prep for a C-section if the need arose. They all cheered me on and, no matter what happened, they never gave up on me. I really think that made all the difference in helping me not feel defeated when I kept losing progress. I told them I could keep pushing and we decided to go for one more round and then assess the situation.

I have never been so focused on anything in my life. I kept my eyes closed and listened to Andrew in one ear and my doctors and nurses in the other. Andrew said I was like Lebron James before a big game…completely in the zone. I prayed and prayed that the Lord would be near to us and help us as he had so many other times during my pregnancy. Finally, during that last 30 minutes of pushing, Lyla began to keep her progress after each contraction. Andrew said, “She knows you’re in charge now!” After 30 more minutes of pushing, Lyla made her entrance into the world! I was so relieved and overjoyed! She weighed 8 pounds, 9 ounces and had the chubbiest cheeks. 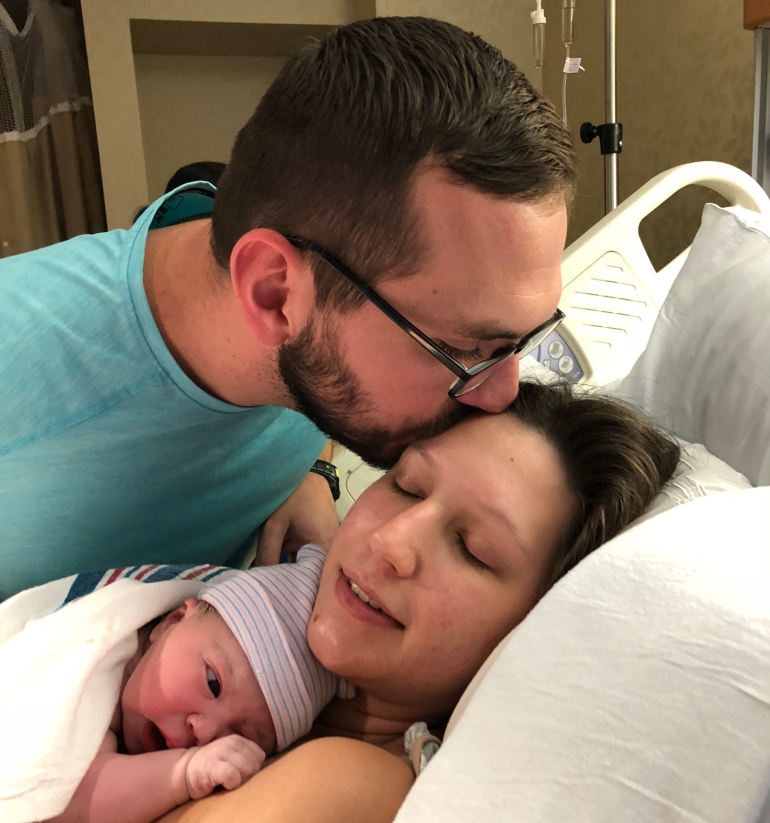 I’m so grateful for my birth experience. The epidural helped me feel empowered to face labor, delivery, and the after-birth care I needed. The team of doctors and nurses around me were encouraging and positive. I trusted them to make the medical decisions necessary, but still felt like they let me have as much say as possible. Andrew was incredible. He never left my side. He comforted and supported me during labor and cared for me so tenderly during my recovery. We are so blessed with a healthy baby, and all of my prayers for my birth experience were answered.

If you’re nervous about giving birth and you have any questions for me, don’t hesitate to ask! I’m an open book. Whatever type of birth you want to have, you can do it! My only advice is to stay open-minded because you truly don’t know what will happen. Every birth is different. Make sure you’re comfortable with your doctor and be willing to take their input, knowing they want you and your baby to be healthy and happy. And know that you’re allowed to change your mind as circumstances change. If you wanted a natural birth but it starts to get overwhelming…get the epidural! Don’t suffer. There’s no award for whose labor sucked the most. If you thought you’d get the drugs for sure but the time comes and you feel like want to go natural, do it! If you end up needing a C-Section to get your baby here, then thank God for C-sections! That is MAJOR surgery and could potentially save your baby’s life or avoid dangerous complications. Don’t let anyone tell you a C-section is somehow “less” than a vaginal birth. My wish for every woman is that she would come out of her birth experience feeling strong and empowered. I’ll get off my soapbox now, but I really mean it when I say to reach out with any questions.

Mamas, what are some of your sweetest birth memories? Any pieces of advice you wish you’d been given beforehand? Share them in the comments!

View all posts by ashtonrosecude

They both wore pumpkin shirts to pick out our porch pumpkins and I almost got a photo where they were both looking. That’s a Bronze medal in the Mom Olympics. 🥉 🎃
8 months of Miller and the milestone blocks no longer stand a chance. This month was a big one:
Our princess is 3 👑
Cleansing the timeline with baby laughs. Lyla always gets the biggest laughs out of Miller just by being who she is. He is fascinated by her and she loves to make him happy.